I have a question for you:
Which people or companies do you publicly associate with?

The reason I am asking you this, is that potential customers and clients often look at the people or businesses we associate with, as a short-cut to determining the kind of people WE are.

Trust and credibility can either be destroyed or boosted in seconds, depending on the individuals and companies we are aligned with or associate with.

I recall being at a local business exhibition, when a young man joined a small group of people I was speaking informally with, before we entered the main exhibition area.  He introduced himself and joined our conversation.  One of the guys asked him what line of business he was in and he said he owned a local printing company. After about 5 minutes, the group dispersed.

Interestingly, just before the printer joined us, one of the guys said he was looking to get some promotional flyers printed and needed to find a local print company.  I was curious why he never asked for the print guys business card, so when I saw him later, I asked him.

“I noticed he arrived with (persons name.)  That guy’s little better than a conman.  If he hangs around with people like that, I don’t want him near me or my business.”

It’s possible that the print company owner never knew about the reputation of the man he arrived with and later sat with.  He was almost certainly unaware that he had just damaged his reputation with a large number of people in his local business community – his potential clients.

The bottom line: We need to be extremely careful before we associate our name, brand or reputation with another individual or company.

I am not an active user of Linkedin, but have an account there purely as a way to study it, for my work as a marketing coach.  It’s a good service, which is why I study it, but one that I have zero need for right now.

However, I get emails every day from people via Linkedin, whom I have never heard of, asking if I will join their ‘network’.

The thing is, at least 90% of these invites claim that I’m someone they have worked with, even though they know it’s a total lie and I don’t even know them!

Why do they do this?

If they send that spammy message to enough people, some will accept, in an ill-judged attempt to build their own network.

Guess what kind of people send those requests? Right – the kind you do NOT want to be linked with!

Here’s a great question to ask ourselves

If a stranger wanted to build a picture of the kind of person I am, JUST by looking at who I associate with, what kind of a picture would that be?

If you are not happy with the answer – disconnect from your toxic contacts and replace them with honest, credible people like you!

I was just looking at a website, where the owner has a small banner, which pleads with total strangers to join his LinkedIn network.  I checked out his Twitter profile, and he’s doing the same there too.

It’s actually a pretty common tactic among some businesspeople, who think it will help them develop their business.

If they can just get another 100 or 1000 people into their ‘network’, business will start to pick up…..right?

I have been building and studying commercial networks for over 20 years and have personally experienced (literally) life changing results.  In every case, the most valuable networks were always those that were built by people who focused on quality, rather than quantity.  These networks contained influential people, who had credible access to the people or organisations that the networker needed to know.

For example, I see web designers, SEO experts, consultants etc who are wasting stacks of time trying to get 1,000 strangers into their ‘network’, when they could get endorsed access to 10,000 or 50,000 targeted businesses or people, via just one influential, well-connected contact.

A network of just 10 highly influential, respected people is of massively more commercial value to you, than a network of 100 or 1000 people with little influence, interest or reach.

Focus on building a new commercial network, with just 10 people, who have credible access to thousands or more of your prospective clients.  These people can help you get the backing, the sales, traction or the audience your project needs.

If you wanted someone to make you a superbly crafted piece of handmade, wooden furniture, you would go to an experienced carpenter or cabinet maker.  You know that it takes training and dedication in order to develop the skills required, to build beautiful furniture.  You wouldn’t just buy yourself; a hammer, a saw, some wood and nails etc, and expect to immediately be ‘gifted’ the skills required to build it yourself.

For some reason, many people seem to think that different rules apply to anything connected to the Internet!

In marketing, I see people every day, who believe that just because the tools exist online, to help them build a network or community, that all they need to do is start using them.  Then, they start blogging, using FaceBook, Twitter, LinkedIn etc and wonder why they see very little commercial progress.

It would be just like giving me a carpenter’s tools and expecting me to build some beautiful furniture – I would end up with nothing more than bruised thumbs and an ugly pile of wood!

The best most people achieve from their online community / network building, is to develop lots of ‘links’ with others, who are equally unaware how to commercially benefit from all these tools.

If you are serious about using social media tools to help you improve your marketing, don’t end up with bruised thumbs! Learn the fundimentals of community building AND THEN start using these amazingly powerful tools.

We have all heard those stories, where someone has used PhotoShop to make themselves look younger, more handsome or thinner – right?

Well, what I am about to share with you here is what I call photo-shock!

It’s the shock someone experiences when they meet someone for the first time, who they have previously only seen very heavily PhotoShopped pictures of.

I spoke with a friend last week, who told me about her shock at meeting a man for the first time; whom she had only previously communicated with via twitter.

They agreed to meet in person; as this guy is a designer and my friend had some design work, which he wanted the chance to quote for.  So, they decided it was best to meet in a public place and chose Starbucks. My friend arrived a little early, grabbed a coffee and waited.

Noticing her twitter friend was about 20 minutes late, she decided to give him a quick call, just to make sure he was OK. The weather was extremely bad and she was concerned he may have had an accident.

Imagine her surprise, when he answered the phone and told her he was already there; sitting upstairs enjoying a coffee!  Now, my friend had sat downstairs, close to the door and she watched each person come in. She told me:

“At this point Jim, I just assumed he must have arrived before I did; because I watched the door like a hawk, so that I could welcome him and ‘break the ice’.”

Even after being told where he was sitting, she STILL couldn’t spot him – until he called over to her!  Suddenly she figured out what had happened!

The picture used by her twitter friend had been so heavily PhotoShopped that it was basically a different person! As a professional designer and an expert with PhotoShop, he was able to create an amazing set of pictures of himself for his website and twitter profile; which look great – but are nothing whatsoever like he really looks.  She was genuinely shocked!

Most noticeably, the man she met seemed to be around her age (she’s 52), yet the pictures he uses online look to be closer to someone in their late twenties. He had doctored the images to change his age by around 25 years.  As she told me;

it’s one thing to pick pictures of yourself that show you in your best light or to remove the odd zit / spot; but this guy looked like the father of the guy I was expecting to meet. It instantly destroyed any trust I previously had in him.

Before someone will do business with us, they have to trust us.  They need to believe we will deliver on the service we promise or that the product we supply really will do whatever we claim it will.  If someone starts off a business relationship, behind a heavily doctored picture of them self, is it REALLY going to impress a prospective client when they learn it’s a fake?

If you met someone for the first time and saw that they had been using heavily doctored images of themselves online – would it create a ‘trust issue’ for you?

Do you believe, as my friend does, that this is a form of dishonesty or is it OK to use software to make yourself look as good as possible? Is there a limit, beyond which it’s unacceptable, if so, where’s that limit in your opinion?

Let us know what you think! 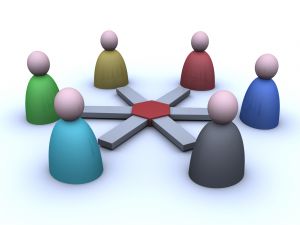