There’s a post on NileRodgers.com, which took my breath away, drove me to tears and then inspired me more than any single post I have ever read!

WARNING: This post has nothing to do with marketing or business development, but I would like to share it with those of you seeking inspiration or strength right now.

It’s a very recently discovered video recording of Nile performing in Japan, with his great friend and Chic co-founder, the late GREAT Bernard Edwards.  It was Bernard’s last ever performance and in the Video, you can see him coming in and out of shot, having to leave the stage to take oxygen to cope with the pain he was in.  ‘Nard refused medical advice and the advice of those who loved him, and insisted in playing bass (beautifully), on this version of “Wild Boys” with Simon Le Bonn and the other members of The Chic Organization.

What makes this one of the most powerful, inspiring posts I have ever seen, is that it shows someone that is so driven and passionate about what they do, that even though they were in incredible pain and soon to leave this world, they drove themselves to do what they lived for.

I have had the privilege of chatting with Nile Rodgers about this, and his insights from that experience have LITERALLY (and I’m using that word in the correct context here) changed my life. 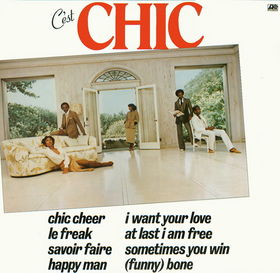 As some of you may know, I had an extremely brutal childhood; growing up on one of the most violent slums in South London.  To give you an idea, I was almost killed in a gang fight at the age of just 17; after being attacked by 5 guys, one of whom attacked me with an axe.

Back then, one of the things that used to bring me and my friends some positive inspiration when we were surrounded by violence and lack, was music.  My preferred sound at the time was the music of Chic.

Chic’s music used to follow me everywhere.  I used to listen to it in the gym when I was boxing and in the disco at the weekend.  I still clearly remember saving up to get each new record on 12″ vinyl from the local record shop.  To this day I still own and cherish all of them. I remember bringing my Chic collection (along with records from the likes of The Brothers Johnson, Crown Heights Affair, Hamilton Bohannon etc ) to parties and guarding them very closely.

Then, we fast forward over 30 years and I see the aforementioned video.  Today, I have a beautiful family, a very successful business and am financially secure for life.  However, I find myself inspired by Chic once more – And to an even greater extent than “back in the day.”

Today, it’s about more than the Chic sound: It’s about the passion that drove Bernard Edwards to MAKE that sound with Nile Rodgers.

After watching that video and then chatting with Nile about it, (the day Nile saw the video for the very first time), something within me changed.  It’s a change for the better and I am eternally grateful to Nile for responding, when I reached out to him.

I hope you don’t mind me sharing this with you, but I believe sometimes it’s good to know a little about the people behind blogs and social networks.  If you read through this far and I managed to get what I am feeling across with these words, then you probably know a LOT more about me than you did before.

* I'll help you build a massively more successful business, increase your sales and boost your profits. Here's how it works.