As a marketing guy, I am always testing ways to make things more effective.  What follows is my experience, after a simple 5 day Twitter experiment, which was just a bit of fun, yet led to some interesting results and totally changed the way I use Twitter!

Here’s what I did and what the results were:

I elected not to tweet any links to this blog and then see what impact it had on my traffic.

Here is what happened.  By the way, you can join me on Twitter here.

Before I started, I expected to see a slight drop in traffic from Twitter.  Surely, if I am not Tweeting links here, fewer people would know about my posts – right?

Instead, traffic from Twitter increased by close to 300% over those 5 days.  This is reflected in the diagram later in the post.  Now, on the first few days, I sent a tweet out, which alerted people that I was not tweeting links to new posts here.  Obviously, those tweets had no links in them and didn’t generate additional traffic, as I monitored real-time traffic from Twitter and there was no measurable increase.  The reason was simply to let people know that nothing was wrong .

So, why the increase in traffic?

It seems this blogs readers and my Twitter “followers” picked up the slack!  Knowing I wasn’t tweeting links to my posts here, they did it for me.  Now, I am not sure how this would pan out if I carried the experiment out over 6 months, but certainly over the 5 days, my online network were a lot more active in promoting my posts.  I also saw lots of new faces showing up in my Twitter stream; people sharing my posts, who I had never heard of or seen previously.

Tuesday saw the highest traffic day to this blog in its history.  This was the result of several factors, ranging from some well connected Facebook and Twitter users sharing that days post, (which ironically was how to get more traffic using Twitter) and that post being featured on a number of popular sites, including webpronews. I have looked to see if these events could be traced to the experiment and it’s impossible to say yes or no with 100% certainty.

I am not a big believer in coincidences and I believe it’s entirely possible that with so many new people sharing my posts this week, it brought my blog to the attention of those publishers, Twitter users and Facebook users.

Here’s what happened to traffic as a result, compared to the past 6 months:

For me, this alone is a good reason NOT to train people to use Twitter as the way to subscribe to your blog.

This was just a fun experiment, carried out over a very short time-scale; rather than the kind of marketing research I would carry out to get the heavy detail required for a fully-fledged project.  You should NOT use these conclusions as the basis of a change in your own Twitter use!

It is also extremely important to mention that the results would have looked VERY different, if I did not already have lots of great people, who regularly share this blog with their followers.  In addition, Twitter accounts for a tiny amount of my daily visitors here, behind; Google, RSS, Facebook, back links and Stumbleupon.  Once my largest source of traffic, Twitter has grown slower than all my other marketing channels.  In other words, I wasn’t risking much.

As I hope I have made very clear, this brief experiment was intended to see what the short-term results would be, by not using Twitter to share my new posts each day.  I had no idea that the results over such a short period, would be so interesting; which is why I intend to change my Twitter use over the longer term now, as I explain in a moment.

I find it interesting that the past 5 days coincided with my best traffic day ever and a sharp increase in follower numbers, see below.  Note, the numbers were increasing fastest from the 13th, not the 12th, which was the heavy traffic day. 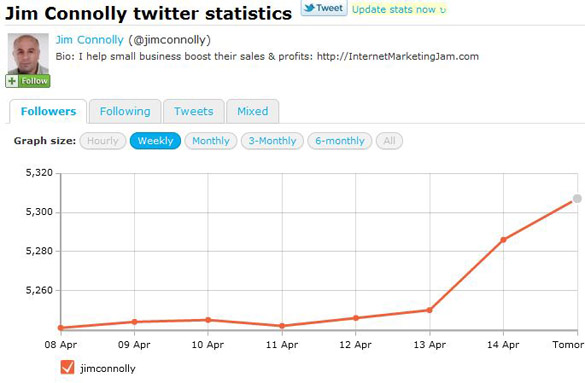 For now, I have decided to only share posts on Twitter, which are related to Twitter (like this one) or posts that I believe have particular relevance to the people I connect with there.  Previously, I shared every post on Twitter twice: Once in the morning and again in the afternoon or evening.

I’m really curious how the numbers will look, over a longer period.  Any marketing professional worth their salt will tell you that you need good data to reach accurate conclusions.  On something like this, you need to be working with a larger set of data.  I will, of course, share my findings with you.

So, for the foreseeable future, I will be using my Twitter time primarily to share YOUR great posts and connect more with you.

IMPORTANT:  If you usually catch up with my latest posts via Twitter and don’t want to miss anything, subscribe to the blog or get new posts delivered direct to your inbox, using the “Free Updates” box at the top right of this page.