It has never been easier for anyone to claim anything, now that we can publish whatever we wish on a website or blog.  As a result, our prospective clients want to know if we truly are as good as we say we are.  They want to know if our product will genuinely do what we say it will.  In short, our prospective clients and customers are, quite rightly, looking for proof.

I personally experienced something a couple of days ago, which demonstrates both the importance of proof and the power of an influential person, in changing how people feel about us. 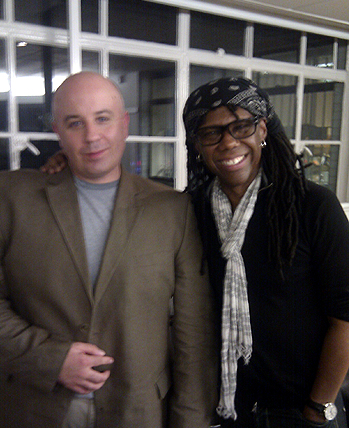 On Monday, after an evening with Nile Rodgers, Nile did a book-signing and I decided to get one of my copies of his autobiography, “Le Freak“, signed.  So, I stood in line with lots of other fans of Nile’s work at his book signing.

Whilst standing in line, a lady from the book store was handing out pieces of paper, so we could write our names down and make it easier for Nile to ensure he didn’t misspell anyone’s name.  When she reached me, I explained that I didn’t need the piece of paper, as I know Nile.  Her look suggested that she wasn’t convinced.  She was, let’s say, a little suspicious.

As I made my way slowly to the front of the line, the lady approached Nile and said; “Apparently you already know this gentleman?”

Nile replied; “Of course I do.  We work together!”

I later discovered that it’s not uncommon for people at events like that, to pretend they know celebrities or industry leaders.  They do it, knowing they will get found out as soon as they get face to face with the famous person, who obviously has no idea who they are.

That’s a huge risk to take, which begs the question…

Why do people fake endorsements from influential people?

It’s simple:  These endorsements are extremely powerful!  People use endorsements from industry leaders or celebrities as a short-cut in their decision making process.  As soon as people believe that you are endorsed by someone they admire and respect, it immediately, massively changes how they feel about you, your product or service.

For instance, when I was stood in line with Nile’s other fans, no one knew who I was because I’m not famous.  As soon as Nile publicly acknowledged me with a hug and a handshake, the people around me started talking to me.  I had strangers asking me what line of work I was in (I don’t look much like a rock star!)  I had strangers asking for my email address and my Twitter name.  Even the lady from the book store, who was so cautious of me earlier, seemed fine as soon as Nile connected with me.

Claims without proof can be toxic!

The power of influence only ignites, when it is verified.  In the above example, not only was the lady from the book store not impressed when I said I knew Nile, it actually put her on guard until she saw proof!  So, if you use testimonials or endorsements in your marketing, especially from influential people or organizations, be prepared to back them up or risk them having the wrong impact.

Quick Tip: One idea I have for proving an endorsement, which I believe could be extremely effective, is for the person offering you the endorsement, to include it on THEIR website, which you link to from your own site.  The endorsement could be on a “hidden but available” page.