With each passing day, the problem became more frustrating.  Over 1000 people had followed me, unaware that I was unable to follow any of them back.  I tried everything – I sent emails to twitter’s tech support, I sent ‘tweets’ to the tech support staff, I even contacted twitter’s boss Ev Williams. No one fixed the problem or even responded to me – no tweets, no emails, nothing!

I managed to find a contact, who knows someone at twitter and was kind enough to email them for me.  Then, I sent a tweet out and everything changed – within minutes!

My 5 day old problem was fixed within 5 minutes of me sending the message below to the 22,000 people who follow me. It basically says how Robert Scoble suggested I use FriendFeed instead of twitter – along with my FriendFeed user name (which is jimconnolly) 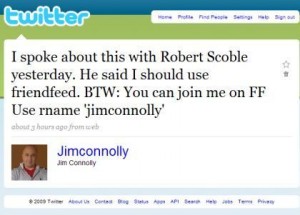 What I found frustrating and disappointing, was that it was not until some well-connected people got involved, that anyone listened to me.  When they did, this 5 day problem was fixed in minutes.

Amazingly, within literally seconds of the fix, I received my first and only communication from twitter – a tweet that said; “It’s a bug : ( see status blog!” That post has been on the status blog for days and my problem had lasted for days – yet the fix and the only response I got from twitter, both arrived at the same time; 5 minutes after my post!

I WILL continue to help YOU develop your twitter network; because for 99.9% of users, Twitter is still the amazing service I have always VERY PUBLICLY raved about. I will also continue to tweet, just like before.

However, I shall no longer be promoting my own twitter account via this blog; which is responsible for attracting so many of my followers (twitter associates) – until they invest in better tech support.

Apparently, my rush of new followers is what caused the problem.

I know the team at twitter work extremely hard, because I have spoken to people who have visited the offices and interviewed them!  That’s why I’m going to stick around.  I’m hoping that as the business model develops, some money will be invested in helping twitter’s dedicated, but overloaded tech support team. When it does, the service will be amazing!

However, based on the messages I have received since my problem started, it seems that currently, unless you have high profile contacts, are famous or your problem is very public, like the recent phishing attacks, they just don’t have the resources to respond effectively. There are exceptions to this, but my personal experience and the stack of feedback I’ve received confirms it’s a valid concern.

I can’t wait until the tech support issue is resolved and I can fall back in love with Twitter. This is only a lover’s tiff, not a divorce!

I just heard (10am Sunday 25th January) that Robert Scoble @scobleizer has also got the exact same problem I had; unable to follow people back. I wonder how long it will take before his problem is fixed? Will twitter fix it super fast OR will they make him wait the standard 5 days; just to make a point about how ‘evenly’ they treat all their users?

Mike Butcher – The UK & Ireland Editor for Techcrunch, sent me a couple of tweets today and also an email.  By the time Mike emailed me, he thought I had to be using a robot or something, to have developed such a great twitter network so quickly!  We spoke and by the end of our phone call, everything was fine – but the story is excellent and well worth sharing with you!

Here’s Mike’s initial tweet to me (he’s actually a really nice man when you speak with him – honest!)

You have 22k followers, a big UK Tweeter. Your tweets are rather dull. Your blogs slow/derivative. What gives?

Although Mike had read my blog and was following me on twitter, he was amazed that other people were doing the same.

I’m guessing you are asking the wrong person – Thanks for the compliment though ; )

Shortly after, Mike sent a far more friendly tweet to me:

No probs, just trying to keep you on your toes. I’m pretty dull too, but then I don’t have 22k expecting Socratic insight.

Twitter is experiencing a problem as I write this; where certain people (me included) with large follower / following numbers are unable to follow people back.  My follower count has froze and anyone I follow is getting notification, but twitter isn’t allowing me to follow them.

I told Mike I would follow him, so he could send me a DM (direct message) and I did – but the Twitter problem meant he never got followed!

This, apparently, is why Mike assumed I was using a robot, to follow people and then immediately unfollow them.  It’s odd really, as I’m actually following over TWENTY THOUSAND PEOPLE back. So, he emailed me to say he thought I might be tricking Twitter.

In fairness to Mike, he’s not using twitter the way I do.  He currently has over 6,000 followers (because he’s a famous editor), but only follows less than 1,000 of them back.  That’s fine, but the complete opposite of the kind of ‘community building’ I focus my Twitter efforts on.

I called Mike this afternoon, to let him know about the Twitter follow problem.  He’s actually a very nice person to speak with.  I also sent him a few links, to show how this blog and my twitter account act as two ‘outposts’ for the same, large network.

Mike’s right, it is unusual to have 22,000 followers on Twitter (and so quickly), but then it’s ALSO unusual for this blog, which was only launched in the middle of October, to already have posts with hundreds of comments.

It’s not as high tech as using a robot, but a network is all about people – right?

With the media focusing constantly on negative business news, it’s refreshing to see some good news stories coming out; (yes, there are still a lot of businesses doing really well!)

This article, from my tech news blog, gives some background to yesterday’s announcement by Apple; that their figures for the last quarter are the best in the Company’s history!

Remember; Apple produce an expensive range of high quality products, which are non essential goods. They also operate in a market sector, which is supposed to be among the most challenging right now.

The truth is, whether you love or loath Apple’s products and services, their marketing is superb. With the right kind of targeted marketing and a good quality product or service, there’s still a stack of potential out there, for your business right now!

I will be focusing on some inspiring success stories, from small and medium-sized businesses shortly.  To ensure you don;t miss them, subscribe to my RSS feed.

QUESTION: What does great marketing have in common with great comedy?

I received an email earlier, announcing the launch, today, of a new website.  If you check the date of this post (20th January 2009) you will see that it’s the day that President Obama was inaugurated.

This international,  mass media event, has received blanket coverage across the news networks and even seen services like Twitter struggle to cope with the huge increase in activity.

In other words, it’s a terrible day to try and launch a new website!

If you are thinking of launching something for your business, make sure you check out what’s happening on that day.

Of course, timing is important to many elements of marketing. For example, the day of the week your mail shot arrives, will have an impact on your response rate.  I advise B2B marketers not to have their mailings arrive on a Monday; because Monday’s are typically very busy for businesses AND your letter will also be with all the other mail that arrived over the weekend.

The day and time of day that your email marketing arrives in someone’s inbox, will also impact your results.  An email, which arrives at 7am on a Monday morning, will arrive in an inbox filled with a weekends worth of junk mail and spam.

That same email, arriving at 11am on a Tuesday morning, will arrive in an inbox, which has already had the spam / junk mail removed.  This makes it easier for your message to stand out and increases the chances of it being read and acted on!

Always check out what’s happening in your prospective client’s world before setting a time to take action.

With so many buzz words and marketing ideas flying around, it’s easy to forget the basics.  That’s why I wanted to share something with you today, which really helps us focus on what’s important.

4 ways to grow a business

As Jay Abraham said so concisely, many years ago; there are only 4 ways to grow a business.  They are:

1. Attract more clients or customers (herein called clients.)
2. Sell more often to your existing clients.
3. Increase your prices or fees.
4. Reduce the number of clients, who stop using your services or buying your products (your attrition rate). Though this was not included in Jay’s original 3 ways to grow a business model.

The most effective businesses, focus on all 4 ways to grow a business.

The least effective businesses focus on just 1 or 2 of them.

Whatever business you are in, try and work on as many of these 4 ways to grow a business as is possible, for someone in your industry.

I have always been a keen reader of blogs, not only because of the actual blog posts – but because of the gold dust you can find in a blog’s comments section.

For example, no matter how knowledgeable a blogger is on his or her subject, there will usually be people reading a post, who can add important additional information.  These comments are often just as likely to provide you with the ideas and information you need, as the original blog post!

If you want to know what your target market thinks about something, take a look at what they are ‘saying’ in the comments section of relevant blogs.  This kind of snapshot can provide you with a useful way to spot trends.

It can also help you identify common problems that your potential customers have, which YOUR business could solve for them!

An excellent way to develop a blog, is to take note of the comments people leave.  It’s a great way to ensure your messages are resonating with your readers and that you are giving people want they want.  Many of the changes here on this blog, have been made in response to comments people have made.

I would finally like to say “THANK YOU” to everyone who comments here.  Your feedback is, as you can see, massively valuable to both my readers and myself.